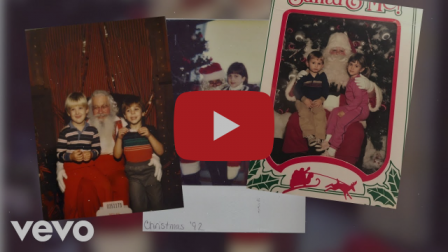 Multi-Platinum trio Lady A takes a trip down memory lane in the music video for their new original holiday song "Christmas Through Your Eyes." Written by Charles Kelley, Dave Haywood and Hillary Scott, they "rediscover the magic of the season" (Taste of Country) as archival footage from their own childhoods in addition to home video of their kids compliments the track's festive lyrics. "Christmas Through Your Eyes" is one of the four brand new tracks found on Lady A's ON THIS WINTER’S NIGHT DELUXE (BMLG Records) available HERE, which has landed on multiple "Best Christmas Music of 2020" lists including Billboard, Parade and SheKnows.

"Christmas Through Your Eyes" is "sweetly sentimental for parents who love watching their kids experience the holidays" (PEOPLE), and fans can watch the new video HERE.

Lady A continues to ring in the holiday season as they take part in CMA Country Christmas tonight (11/30 at 8:00P CT on ABC). The trio brings their one-of-a-kind harmonies to the show with two performances of Paul McCartney's "Wonderful Christmastime" and the Beach Boys' "Little Saint Nick," both of which can be found on ON THIS WINTER’S NIGHT DELUXE.

Over the course of their decade-plus career, Lady A has become one of the 21st century’s premier vocal groups, blending deeply felt emotions with classic Country sounds. As a Country-radio staple, the trio has amassed record-breaking success ushering in 10 No. One hits with more than 18 million album units, 34 million tracks sold and nearly five billion digital streams. The trio earned the biggest first week streams of their career with their critically acclaimed No. One album OCEAN that has been touted as “the finest album of the band’s career” (Nashville Scene). Lady A echoes new life into “the most powerful and passionate work that the trio has created" (PEOPLE), with OCEAN DELUXE EDITION that includes their current Top 10 and climbing single “Champagne Night.” Known for their 9X Platinum hit “Need You Now” which is the highest certified song by a Country group, they have earned CMA “Vocal Group of the Year” trophies three years in a row and countless other honors including five GRAMMY awards, Billboard Music Awards, People’s Choice Awards, Teen Choice Awards and a Tony Award nod. Lady A has been known to take their "triple-stacked harmonies" (Rolling Stone) all over the globe while selling out arenas and amphitheaters throughout the country. For more information visit www.ladya.com.