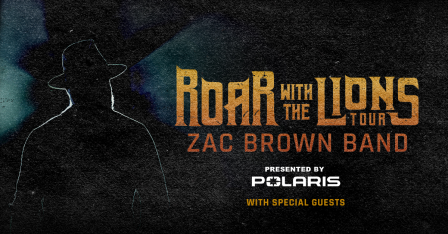 The “Roar with the Lions Tour” will feature music from the band’s entire discography mixed with a dynamic selection of genre-crossing cover songs that are a signature mark of each Zac Brown Band show. The tour is grounded in the historic characterization of the lion, depicted as a symbol of strength, courage, and loyalty. Always counted upon to bring sunshine and warmth into the lives of others, lions are fearless, treating one another with dignity and respect, bravely walking through the forests they rule. At each show, fans can expect fiery performances and a rollicking good time. Special guest Gregory Alan Isakov will join the tour May 24 through June 27 and St. Paul and The Broken Bones will open the Wrigley Field show on September 9. Please see itinerary below.

“Our summer tour is inspired by the folklore surrounding the figure of the lion. I am a Leo, and all of the guys in the band are lions,” said Zac Brown. “They exemplify strength, courage, intelligence, and loyalty, and work in tandem to defend their territory and one another. The crowd is our pride – rooted in togetherness and fiercely loyal. They always show up for each other, no matter what, just like our fans always show up for us. We can’t wait to hear you roar with us!”

Zac Brown Band is one of the most successful and consistent touring acts of the last decade and regularly claim a top spot in Pollstar’s Live75 charts. The Boston Globe praised the band’s live show saying , “Zac Brown Band’s blend of chops, spirit, and knowing exactly how to please a crowd has made them one of the summer concert season’s most reliable draws, always ready for a good time but also keenly aware of how to keep an audience on its toes.” Zac Brown

Band currently holds the record for most consecutive sold out shows at the historic Fenway Park and was recently named by The Boot one of the ’10 Best Country and Americana Live Acts of the 2010’s.”

The Summer 2020 “Roar with the Lions Tour” will come directly on the heels of the upcoming spring 2020 leg of “The Owl Tour,” featuring 18 stops across the United States and Canada.

All dates, cities and venues below are subject to change. For tickets or more information please visit ZacBrownBand.com.

ABOUT ZAC BROWN BAND: Zac Brown Band is a multi-platinum, Grammy Award-winning, southern rock group led by front man, Zac Brown. Throughout their decade-long career, Zac Brown Band has had six consecutive albums reach the top 10 of the Billboard 200 and five consecutive albums debut at #1 on Billboard's Country Albums chart. To date, the group has won three Grammy Awards including Best New Artist in 2010, sold more than 30 million singles, 9 million albums, has achieved 15 #1 radio singles and are the second act to top both the Country and Active Rock formats. Zac Brown Band has headlined 7 North American Tours and currently holds the record for most consecutive sold-out shows at the iconic Fenway Park. Since their debut, Zac Brown Band has developed a reputation with critics and fans alike as one of the most dynamic live performers, marked by strong musicianship that defies genre boundaries.

ABOUT GREGORY ALAN ISAKOV: Born in Johannesburg, South Africa, and now calling Colorado home, horticulturist-turned-musician Gregory Alan Isakov has cast an impressive presence on the indie-rock and folk worlds. His four full-length studio albums (That Sea, The Gambler; This Empty Northern Hemisphere; The Weatherman; and Gregory Alan Isakov with the Colorado Symphony) were released on his independent record label, Suitcase Town Music. Evening Machines, his fifth and newest album—recently nominated for a Grammy award for Best Folk Album—was released by Suitcase Town Music in partnership with Dualtone Records. Isakov has toured internationally with his band, and has performed with several national symphony orchestras across the United States. He also manages a small organic farm in Boulder County, which provides produce to over a dozen local restaurants.