Rare session for Nelson, a former radio DJ, getting back to his roots, playing his favorite music 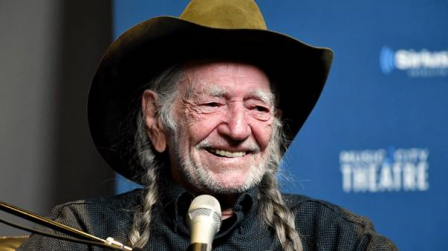 While he just can’t wait to get “On the Road Again,” Willie Nelson will reconnect with his DJ roots and share stories behind 10 of his all-time favorite songs this Memorial Day weekend. Willie Nelson From His Roadhouse to Yours… will premiere this Friday, May 22 on his exclusive SiriusXM channel, Willie’s Roadhouse (Ch. 59).

“I picked out some of my favorite songs to play,” says Nelson, who worked as a disc jockey at several stations in his native Texas and Vancouver, WA, early in his career. “It’s impossible for me to pick out 10 of my favorite songs, maybe a thousand would’ve been easier.”

The 10 songs that Willie ultimately selected include “Moonlight in Vermont” by Frank Sinatra (who he reveals to be his “favorite all-time singer”) and “A Song for You” by Leon Russell, as well as songs by Ray Charles, Roger Miller, Johnny Bush, and Vern Gosdin, and his own recordings of “Stardust,” “Help Me Make It Through the Night,” and, of course, “On The Road Again.”

“It’s kinda nice to have your own channel here on SiriusXM and be able to hear really the kind of music I think is good. I was brought up listening to it,” Willie adds, as he introduces Patsy Cline’s iconic version of his timeless song “Crazy.”

Willie’s Roadhouse DJs include Willie’s daughter Paula Nelson (6 pm-midnight ET), and Dallas Wayne (12-6 pm ET), along with Grand Ole Opry legend Jeannie Seely (Sundays with Seely), Ray Benson of Asleep at the Wheel (Austin Outer Limits), and Ranger Doug of Riders in the Sky and the Time Jumpers (Ranger Doug’s Classic Cowboy Corral). The channel is also home to the Grand Ole Opry, and has been featuring Opry “House Guest” DJs including Brad Paisley, Marty Stuart, Pam Tillis, and Steve Wariner, while the historic radio show from Music City U.S.A. has cut back to one show per week during the COVID-19 outbreak.

See Willie talk about his early career as a disc jockey at this SiriusXM subscriber event in Nashville in 2017: https://www.youtube.com/watch?v=TScHgu-aMgY

SiriusXM’s Willie’s Roadhouse is available to subscribers nationwide on SiriusXM radios (channel 59), and to everyone – including anyone who is not already a SiriusXM subscriber – on the SiriusXM app and connected devices as part of SiriusXM’s free streaming access period through May 31. For more information and to start listening, visit: SiriusXM.com/streamfree.