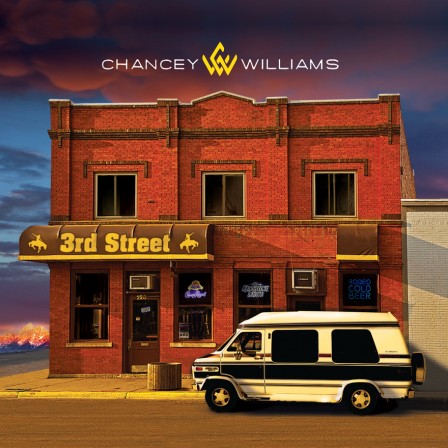 Rising neo-traditional country music sensation Chancey Williams will kick-off summer with the release of his highly anticipated new album, 3rd Street, produced by country music hitmaker Trent Willmon on Friday, May 22. The 13 track full-length album is sure to resonate with country music fans of all ages from the reminiscent throwback tune "College," to upbeat anthems like "The World Needs More Cowboys" and "Fastest Gun in Town" to raw, stripped-down ballads like "Let It Go" and "Wyoming Wind." Gritty two-stepping tracks "Outlaws" and "One More For the Road" are sure to get boots spinning out on the dance floor this summer. The album also features fierce fiddle player Brooke Latka, 2020 Rocky Mountain CMA Musician of the Year, on a stunning rendition of the classic, "Meet Me in Montana," released Monday. The song joins "College", "Let it Go" and "Outlaws" as a part of four instant gratification downloads offered with the pre-sale of the album that started in April.

Williams is set to take his new music to the stage when he joins Toby Keith's "Country Comes to Town" tour later this summer. “We are super excited to play these shows,” commented Williams, “I have been a fan of Toby’s throughout my career, he’s the definition of a superstar. Plus, we all look up to Toby and his whole team, so it is a real thrill, we can’t wait.” "Fastest Gun in Town," the most recent single, made its live debut during round six of the WNFR. Keeping to his cowboy roots, Williams was eager to release the single and its official music video during the "Superbowl of Rodeo." Fans can watch the new video, an authentic piece showcasing the true rodeo lifestyle, HERE.

The third single off the album, "Tonight We're Drinkin'," debuted at no. 6 on iTunes New Country Chart and made its live debut at the sold-out 98th annual Greeley Stampede, prior to Cody Johnson's performance. Country Rebel debuted Williams' second single off the album, 2020 Rocky Mountain CMA Song of the Year “Wyoming Wind," a classic country ballad that has won the hearts of traditional country music fans. "'The World Needs More Cowboys,' the first single released from the album, is a fun anthem that captures the way I feel about the American West and the high character of the people here," said Williams. Read more about the single in William's Q&A with Cowboys & Indians Magazine HERE. Renewing the traditional roots of country music for young fans and old spirits who covet authenticity in his honest ode to the Old West, Williams was chosen to represent Wyoming as one of the five artists featured in the USA Through Music campaign that airs as a short film on BBC World News. Follow Chancey Williams & the Younger Brothers Band on Facebook, Instagram and Twitter

About Chancey Williams and the Younger Brothers Band: Saddle bronc rider turned country singer-songwriter, Chancey Williams has gone from competing on horseback to performing on center stage in major arenas across the country. The only artist besides Chris LeDoux to both ride and perform on stage at the world’s largest outdoor rodeo, known as "The Daddy of ‘Em All," Cheyenne Frontier Days, Williams is the next authentic cowboy of country music. Growing up on a ranch in the Cowboy State (Wyoming), Williams learned the cowboy-way-of-life from his father, and like his dad, Williams found himself a successful bronc rider, qualifying for the National High School Rodeo Finals, twice at the College National Finals and winning two rounds at Cheyenne Frontier Days. In May 2017, Chancey Williams and the Younger Brothers Band released their album, Rodeo Cold Beer, which debuted at #7 on iTunes Country Albums Chart and earned the #1 spot on Billboard's Heatseekers Mountain Chart.