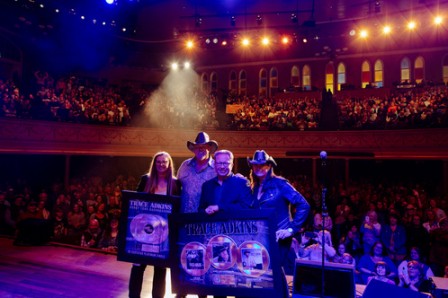 With the 2005 release of his hip-shaking “Honky Tonk Badonkadonk,” MULTI-PLATINUM entertainer Trace Adkins changed the course of Country music forever. On April 4th, at Ryman Auditorium, Adkins was completely surprised when Terri Clark interrupted his SOLD-OUT show to share the news that his monster hit has been officially certified TRIPLE-PLATINUM by the RIAA.

“Performing at the Ryman is always a highlight, but a sold-out crowd made it even more special,” explains Adkins. “Then, my good friend, Terri Clark, walked on stage and caught me totally off guard. Hell, I didn’t know what she was up to! Am I supposed to be singing a song with her? Is she going to slap me? Surprising me with news of the certification on the Ryman stage was a moment I will cherish.”

A powerful night steeped in the essence of his one-of-a-kind career, the show was full of heartfelt emotion, towering baritone vocals and the playful spirit which made “Honky Tonk Badonkadonk” a runaway success, marking the hitmaker’s first Ryman visit since 2012. Live streamed via Mandolin, the show also served as the kickoff to a new leg of THE WAY I WANNA GO TOUR, which now continues through October. 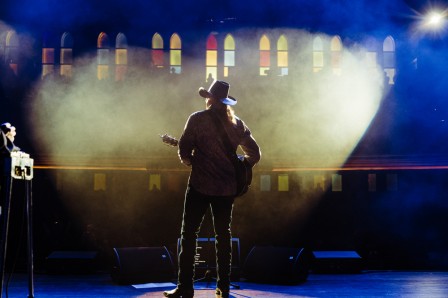 Fans can get a look into the milestone night as Adkins sits down with Entertainment Tonight on the iconic stage and takes PEOPLE.com behind the scenes. “I love that song. I really do. It’s the gift that keeps on giving.” Adkins tells Entertainment Tonight ahead of the show about the newly TRIPLE-PLATINUM certified track “Honky Tonk Badonkadonk.”

Celebrating the fun-filled anthem that ushered in a whole new era, Adkins has released a special EP – HONKY TONK BADONKADONK: THE REMIXES. Reimagining the trailblazing anthem five new ways – from “Country Club” to “‘70s Groove” and more – the EP was released as an unexpected surprise on Friday (4/8), and you can stream, download or share HONKY TONK BADONKADONK: THE REMIXES here.

Looking ahead, dozens of dates are scheduled across the U.S., Canada and Mexico, as Adkins continues to follow up his acclaimed 25th anniversary album, THE WAY I WANNA GO (Verge Records). Check out full list of tour dates here. Released last August and praised by Billboard as a “creative tour de force,” the project featured the rowdy single, “Where the County Girls At” (feat. Luke Bryan and Pitbull), and later this year, Adkins will co-star in FOX’s new drama series, MONARCH.

ABOUT TRACE ADKINS: In his 25-year career in Country music, Trace Adkins has sold over 11 MILLION albums, charted more than 20 singles, earned numerous awards, multiple GRAMMY nominations, and garnered over TWO BILLION streams. A Grand Ole Opry member for nearly two decades, the Louisiana native is known for dynamic baritone and fiery, always-memorable live performances, and has expanded his Country career to include film and TV acting. He broke out in 1996 with his debut album, DREAMIN’ OUT LOUD, cracking the Top 5 of Billboard’s Hot Country Songs chart with “Every Light In the House Is On” and following with the #1 smash, “This Ain’t (No Thinkin’ Thing).” Since then, Adkins has pioneered a mix of classic Country minded traditionalism and adventurous, good-natured showmanship, breaking open new avenues in modern Country through fun-filled hits like “Honky Tonk Badonkadonk” and “Hillbilly Bone” (with Blake Shelton). He’s celebrating the 25th anniversary of his debut with 2021’s THE WAY I WANNA GO (Verge Records), a 25-song album that released to critical acclaim with Rolling Stone praising as “lighthearted club-ready fun…,” PEOPLE noting it’s “packed to the hilt with hits,” and Billboard applauding “a creative tour de force that serves up the lyrical and stylistic diversity that would make his hero Milsap proud.” Mixing pure-Country reverence with standout collaborations featuring Blake Shelton, Melissa Etheridge, Snoop Dogg, Stevie Wonder on harmonica and more, the LP introduces Adkins’ latest single “Where The Country Girls At” (feat. Luke Bryan and Pitbull). Headlining THE WAY I WANNA GO TOUR this spring, Adkins will also host Season 3 of Ultimate Cowboy Showdown on INSP plus star in FOX’s new drama series, MONARCH, expected to premiere later this year.