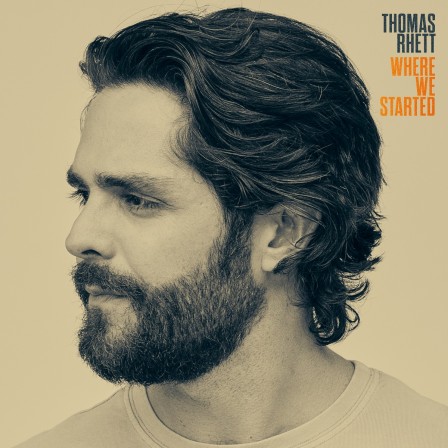 5x GRAMMY® Awards nominee Thomas Rhett delivers "his most substantive material” (USA Today) with the release of his sixth studio album WHERE WE STARTED via The Valory Music Co. A decade into his recording career — spawning 18 chart-topping hits and the longest current active streak of No. 1s in the format (Mediabase/Country Aircheck Chart) — the superstar details the path to the beginning with a showcase of prolific songwriting, sonic trailblazing and unstoppable momentum across 15 tracks. Delivering “essential listening” (Music Row), Thomas Rhett collaborates with Katy Perry for the dramatic roots-pop title track and Riley Green on the weekend-anytime groove of “Half Of Me,” while Tyler Hubbard and Russell Dickerson appear on the sobering “Death Row” — a song Billboard praises as "one of the most impactful, real country songs you’ll hear this year.”

Fans will continue to have a front row seat to new music this year on Thomas Rhett’s headlining BRING THE BAR TO YOU TOUR - launching on June 17. Tickets are available at www.thomasrhett.com/tour.

Ten years after signing his first record deal with Big Machine Label Group’s The Valory Music Co., arena-packing superstar Thomas Rhett — dubbed “the most reliable maker of No. 1 singles in country music” (Variety) — has 18 multi-PLATINUM and GOLD-certified No. 1 hits, 12 BILLION streams and the longest current active streak of consecutive No. 1s in the format (Mediabase/Country Aircheck Chart). Declared “a prince in the genre” (USA Today), he has been honored with eight ACM Awards including Entertainer of the Year, two CMA Awards, five GRAMMY nominations, plus trophies from the CMT Music Awards, Billboard Awards and iHeartRadio Awards, in addition to being recognized with two CMA Triple Play awards for penning three No. One songs within a 12-month period. The superstar’s sixth studio album WHERE WE STARTED (The Valory Music Co.) is available now. Inspired by family, friends and love of the outdoors, Thomas Rhett founded the Dos Primos Tequila Company alongside his cousin Jeff Worn in 2018.