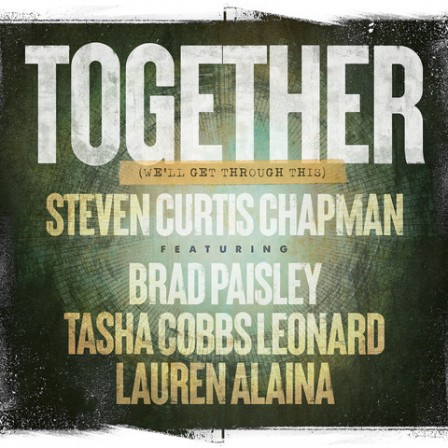 In these trying, confusing times, music is a healer — of the mind, the spirit and sensibilities, and that's exactly why five-time GRAMMY® winner Steven Curtis Chapman enlisted his friends Brad Paisley, Lauren Alaina and Tasha Cobbs Leonard to release "Together (We'll Get Through This)." Proceeds from the inspiring and uplifting collaboration will benefit the Opry Trust Fund and Gospel Music Association to assist those who've been gravely affected by the COVID-19 coronavirus pandemic.

Rolling Stone Country premiered a first listen to "Together (We'll Get Through This)," writing "The song’s first verse acknowledges the unprecedented circumstances of the pandemic, echoing the fear and uncertainty that millions are experiencing, while the simple, effective chorus offers a message of solidarity in the time of crisis, with an eye toward a brighter future (Stephen L. Betts)." The visualizer for "Together (We'll Get Through This)" debuted on Rolling Stone Country and K-LOVE.

Chapman shares, “I can’t tell you how excited and honored I am to be joined by three incredible artists, Brad, Lauren, and Tasha, to share this song that we all hope will fan the flame of a message that seems to be desperately needed now more than ever in our world. We are in this together…we really do need each other…and together we will get through this."

Leading up to the single's release, Chapman performed a song by each of the featured artists on his Instagram. The five-time GRAMMY® winner also visited with 650 AM WSM's "Coffee Country & Cody" via Zoom to chat about "Together" and how he has spent his time at home following the postponement of his SCC SOLO Tour due to COVID-19.

ABOUT STEVEN CURTIS CHAPMAN: In a career that has spanned over 30 years, Steven Curtis Chapman is the most awarded artist in Christian music history with 59 Gospel Music Association Dove Awards, five GRAMMYs®, an American Music Award, 49 No. 1 singles, selling more than eleven million albums and with ten RIAA-certified gold or platinum albums to his credit. He has been on “Good Morning America,” “CBS Sunday Morning,” CNN, MSNBC, “60 Minutes,” E! Entertainment, “The Today Show,” “Fox & Friends,” “CBS This Morning,” and “The Tonight Show,” Glenn Beck’s “The Blaze,” along with appearing in the pages of People, Billboard, Parents Magazine, and more. A vocal supporter of adoption, Chapman, along with his wife Mary Beth, founded Show Hope in 2003, a nonprofit organization that helps restore the hope of a family to orphans.

ABOUT BRAD PAISLEY: Brad Paisley is a critically acclaimed singer, songwriter, guitarist and entertainer whose talents have earned him numerous awards, including three GRAMMYs, two American Music Awards, 15 Academy of Country Music Awards and 14 Country Music Association Awards (including Entertainer of the Year), among many others. He has been a proud member of the Grand Ole Opry since 2001. Paisley has written 21 of his 24 #1 hits and has accumulated over 3.6 billion on-demand streams world-wide. His current single was released April 15, “No I In Beer,” and is an uplifting song about spending time with close friends and family. Paisley’s first prime-time special, Brad Paisley Thinks He’s Special, aired on ABC in December 2019 and garnered over 9.2 million viewers. Paisley is involved with a successful ongoing multi-year ad campaign with Nationwide® Insurance, along with Peyton Manning. Paisley and his wife, Kimberly Williams-Paisley, are co-founders of a nonprofit organization called The Store, a free-referral based grocery store, which aims to empower low income individuals and families in the Nashville area. Go to www.thestore.org for more information. Paisley has partnered with Boot Barn® and developed an exclusive line of jeans, hats, T-shirts, jewelry, belts and woven shirts called Moonshine Spirit by Brad Paisley.

Lauren’s critically-acclaimed sophomore album, Road Less Traveled, landed on multiple “Best Of” lists including Billboard, Rolling Stone and Amazon, and it became the top-streamed female country album release of 2017. Praised as “full of life lessons and uplift” (PEOPLE), the collection of 12 songs all written by the young star includes Lauren’s first No. 1 smash, “Road Less Traveled,” the Top 25 hit “Doin’ Fine,” and the deeply personal and inspiring, “Three.”

Lauren has received multiple nominations for the ACM Awards, CMA Awards, CMT Music Awards, Teen Choice Awards, Radio Disney Awards and Billboard Music Awards including taking home last year’s ACM New Female Vocalist of the Year Award and CMT Collaborative Video of the Year Award for “What Ifs,” the 4x Platinum-selling No. 1 hit with childhood friend, Kane Brown. Lauren is one of CMT’s Next Women of Country and she received her very first CMT Music Award for Breakthrough Video of the Year with her No. 1 hit “Road Less Traveled.”

The “sassy Southerner with killer pipes” (PARADE) has shared the stage with superstars including Alan Jackson, Blake Shelton, Carrie Underwood, Luke Bryan, Martina McBride and Jason Aldean, as well as headlining her own shows including her recent U.K. tour with sold-out shows in Manchester, Bristol and Glasgow. Lauren launched her first headlining tour That Girl Was Me Tour in January of 2020 and sold out every show of the run. She was in the midst of the Blake Shelton Friends and Heroes Tour when the stay at home orders took effect in March.

ABOUT TASHA COBBS LEONARD: In less than a decade, GRAMMY® Award-winning singer/songwriter Tasha Cobbs Leonard has become one of the most iconic artists in gospel music history. Winner of the Billboard Music Award for Top Gospel Artist for the past two years, her latest radio single, “You Know My Name (Live),” recently climbed to #1, while her career-launching hit, “Break Every Chain,” was recently certified platinum by the Recording Industry Association of America (RIAA).

Tasha Cobbs Leonard’s 2013 debut album, Grace, continues to be one of the highest-selling albums of the past five years. With her 2015 follow-up, One Place Live, she earned another GRAMMY nomination and multiple accolades, including two Billboard Music Award nominations and a BET Award nomination.

In August of 2017, Tasha Cobbs Leonard released her most ambitious and intimate project to date, Heart. Passion. Pursuit. The unprecedented in-studio live recording made history in its first week, garnering more first-week streams than any gospel album in history (3 million). The project was the highest-selling new release of 2017 and remains the longest-running #1 gospel album in over three years. She recently earned her fourth GRAMMY® nomination for Heart. Passion. Pursuit.: Live at Passion City Church, a live retrospective featuring standout live arrangements from the hit album, along with powerful stories and testimonies that have become the hallmarks of Cobbs Leonard’s live experience.

This month, Tasha Cobbs Leonard announced her upcoming live recording, Royalty: Live at The Ryman, to be held at Nashville’s historic Ryman Auditorium in August of 2020.

ABOUT OPRY TRUST FUND: Since 1965, the Opry Trust Fund has provided financial assistance in time of extraordinary need, emergency or catastrophe to individuals who are or have been employed full time in a facet of the country music industry (i.e. performer, songwriter, publisher, radio, session musician, etc.). For more information, visit opry.com.

ABOUT GMA FOUNDATION DISASTER ASSISTANCE FUND: The GMA Foundation is the philanthropic arm of the Gospel Music Association (GMA), whose mission is to enhance the health and development of the genre through education, preservation and general welfare needs.

Proceeds from “Together” will benefit the GMA Foundation's Disaster Assistance Fund, which assists those in the Christian/Gospel music community, onstage and behind the scenes. The purpose of the fund is to offer relief to those whose health and basic necessities have been dramatically affected by COVID-19. For more information, visit gospelmusic.org/gmafoundation.