The Helping a Hero Gala raised more than $1 million to fund its programs including new home construction for severely wounded U.S. military veterans 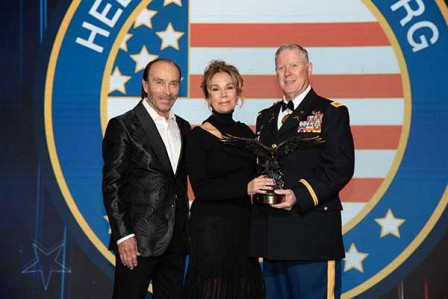 Greenwood, an enthusiastic supporter of Helping a Hero and a 2017 recipient of the prestigious Point of Light Award from the late President George H.W. Bush, presented The Lee Greenwood Award to Kathie Lee Gifford. This marks his 8th consecutive year attending and supporting the annual gala.

Helping A Hero.org is a 501(c)(3) non-profit, non-partisan organization that has awarded more than 100 homes for wounded warriors injured in the global war on terror. Funds raised at the 2019 gala, which was held at the Marriott Marquis Houston, will help fund homes in Louisiana, South Carolina, Nebraska, Florida and throughout Texas. Prominent home builders such as Perry Homes, Chesmar Homes, Lennar Homes and MA Partners donate lots and build these adapted homes at cost. Helping A Hero raises funds and works. with our building partners to design the homes so they are specially adapted to the hero’s needs. Most homes include wider doorways and hallways, roll-in showers, roll under sinks and other adaptations to help our military veterans regain their daily independence after suffering combat related injuries.

This year’s Gala was dedicated to two World War II veterans: Dr. Stewart Morris, Sr. who served in the Navy and recently celebrated his 100th birthday and Rex King, the 96 year old Navy Veteran, former Chairman and CEO of Palletized Trucking, and Chairman Emeritus of Helping a Hero.

Deborah Duncan, host of Great Day Houston on KHOU-TV Channel 11 and a daughter of a U.S. Army veteran, served as Mistress of Ceremonies, along with Staff Sergeant Shilo A. Harris, U.S. Army Retired. Harris, who was burned over 35% of his body when an improvised explosive device (IED), exploded in Iraq in February 2007. Shilo received his Helping a Hero home in partnership with Extreme Makeover: Home Edition in 2012 and serves as the Advisory Board Co-Chair of the charity.

Congressman Don Bacon, USAF, Retired, surprised SGT Justin Anderson, USA (Ret) with the news that he would be a 2020 Helping a Hero home recipient. Justin is a single amputee and lost his leg as the result of a gunshot wound sustained while he was deployed to Iraq. His home will be built in Congressman Bacon’s hometown of Omaha, Neb. Chairman Emeritus, Meredith Iler, had the pleasure of surprising Retired Army Corporal Sue Downes, that she too would be a 2020 Helping a Hero home recipient. She was deployed to Afghanistan when her humble hit an anti tank mine, leaving her a double amputee. Her home will be built in Houston, Texas. Both of these heroes received the Bronze Star and the Purple Heart among other awards and medals.

Please contact for more information, a copy of the gala program, additional photos and video footage.

About Lee Greenwood: Throughout his expansive career, international country music icon Lee Greenwood has earned multiple CMA and ACM Awards, a Grammy Award for Top Male Vocal Performance on “I.O.U,” in 1985, and a multitude of other prestigious award nominations. His discography includes twenty-two studio albums, seven compilation albums, seven No. 1 hits and thirty-eight singles including songs like “It Turns Me Inside Out,” “Ring On Her Finger Time on Her Hands,” “She’s Lyin’,” “I Don’t Mind the Thorns if You’re the Rose,” “Dixie Road,” “Somebody’s Gonna Love You,” “Going Going Gone,” “You Got A Good Love Comin’,” among others. His stand-out hit “God Bless the U.S.A.” has been in the top five on the country singles charts three times (1991, 2001 and 2003), giving it the distinction of being the only song in any genre of music to achieve that feat. It reached the Top 20 of the Billboard Hot 100 chart shortly after 9/11. Known for his stand-out patriotism and support of the U.S. Military, Greenwood has been honored with the Congressional Medal of Honor Society’s National Patriot’s Award, and entertained troops on more than 30 USO Tours. Greenwood was appointed to the council of the National Endowment for the Arts in 2008 by President George W. Bush, confirmed by the United States Senate, and continues to serve on the NEA at the pleasure of the President. His latest book release is a children’s book called Proud To Be An American, which is currently available in stores, on Amazon and leegreenwood.com.

About Helping A Hero: "Empowering Wounded Heroes, One Home at a Time" Helping a Hero is a 501(c)(3) nonprofit, non-partisan organization, founded in 2006, that provides support for military personnel severely injured in the war on terror. The organization’s principal activity is to provide specially adapted homes for qualifying service members through partnerships made with the builders, developers, communities, and the veteran. Helping a Hero strives to engage the community in providing services and resources for wounded American heroes and their families. Additionally, Helping a Hero provides additional support programs such as marriage retreats, caregiver retreats, recreational activities, emotional support, and financial support. For more information, please visit HelpingAHero.org.