The Taylorsville, Kentucky Native Wraps Up A Busy 2019 With More Than 200 Shows Performed, And A New Album On The Way In 2020 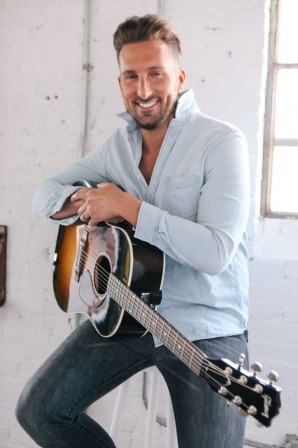 Shelburne took the top spot for most shows played throughout the year, and was recognized along with singer-songwriter Lewis Capaldi, who was the fastest growing artist on Bandsintown in 2019, gaining the largest increase in trackers (followers). Billie Eilish garnered the most interest in her live shows with the most event RSVPs.

Fans with an existing Bandsintown account can view their 2019 High Notes by visiting the search page in the app.

Shelburne Wrapping Up A Busy 2019 + New Music & New Shows On The Way For 2020 JD is wrapping up an extremely successful 2019 with more than 200 shows performed, and a recent announcement that he'll be featured on the cover of the Kentucky Department of Tourism's 2020 Official Visitor's Guide.

The Nashville-based singer is currently in the studio working on new music with famed songwriters Mark Nesler, Carson Chamberlain, Phil O’Donnell and Marty Dodson. Much like he did in 2018 click to watch, JD will release the new album in the summer of 2020 with another FREE show for his fans in his hometown of Taylorsville, Ky.

"Looking into 2020, I can't wait for the release of my new album, and to share more music with my fans," said Shelburne. "Each year, I continue to build upon my loyal fan base, meeting them in person and performing in cities that I have never been to before. The momentum for next year is already being built, yet I still have many goals to reach and new ground to cover. I anticipate 2020 to be the biggest year of my career yet, and would like to thank everyone around me who has supported my career to this point!"

About JD Shelburne: Nashville-based country music artist JD Shelburne was raised on a tobacco farm in Taylorsville, Kentucky, just outside of Louisville. When JD was 19, he found a guitar after the death of his grandmother. He quickly learned how to play it, and began writing and singing songs on his own. By his sophomore year of college, he had found a few gigs at some local bars in Louisville & Lexington, Kentucky area venues, developing a large base of fans along the way.

Fast forward to today, JD’s latest album Two Lane Town, is building upon his blossoming career as a modern country singer, songwriter and performer. His debut single and video for “One Less Girl” world premiered on CMT in 2018, and then went on to become a Top 30 Music Row charted song at country radio. CMT again world premiered his second song and video for “She Keeps Me Up Nights” in April of 2019, which peaked at #3 of their 12 Pack countdown series.

About Bandsintown: Bandsintown believes that live music brings people together through unique communal experiences and creates happiness and understanding in the world.

Bandsintown celebrates artists and helps them grow their careers. As the most trusted source of concert discovery, Bandsintown is where artists and fans connect.

With a reach of 130M Monthly Active fans globally, over 50M registered concert goers and 520k touring artists registered to the platform, Bandsintown offers digital marketing solutions to engage with the most passionate music fans at scale.

Users can download the free Bandsintown app for iOS or Android at www.bandsintown.com.