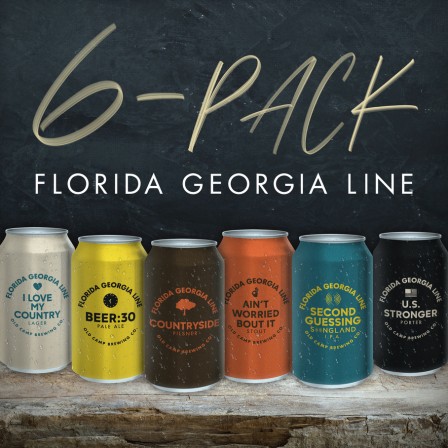 Buzzing into the weekend with a variety pack of tracks, FLORIDA GEORGIA LINE crack open their 6-Pack EP via BMLG Records. The global superstars pop-the-top across all streaming platforms and digital retailers today (5/22).

Hailing that the “ultimate purveyors of good times are bringing the party” with their 6-Pack EP, as seen in People Magazine’s “Picks” on stands now, CMT also spotlighted the batch as part of These 10 Albums Are Hot Tickets, toasting, “Can’t have summer without a six-pack, right?” Following Monday night’s (5/18) premiere on NBC’s Songland, “Second Guessing” was immediately embraced as a “first-dance-worthy wedding waltz” (Yahoo!), jumping straight to #1 on iTunes’ all-genre Top Songs chart and holding the position since.

Leading into Memorial Day, “U.S. Stronger” – penned by FGL’s Tyler Hubbard and Brian Kelley – is an instant-classic anthem of patriotic pride, waving a flag of brotherhood during this time of remembrance. On Sunday (5/24), the duo will be included in the star-studded national anthem collaboration of Big Machine Label Group artists during the NBC broadcast of Indy 500 Special: Back Home Again at 2 p.m. ET.