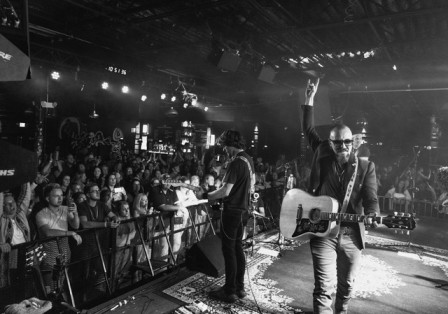 Wheelhouse Records singer/songwriter Elvie Shane wrapped his first-ever headlining run on Thursday (4/21) with a sold-out show at Nashville’s Basement East. Shane brought his MY KINDA TROUBLE TOUR with Frank Ray to a close, playing songs from his critically acclaimed debut album BACKSLIDER, as well as surprised the capacity crowd with guest appearances by Lainey Wilson who joined Shane for a rendition of her ACM Song of the Year winning “Things A Man Outta Know” and Tenille Townes as she and Shane sang their duet “Nothin’ Lasts Forever."

Shane’s new single “County Roads” was one of the Most Added songs at Country radio upon its debut and continues to climb. Co-written by Shane with Dan Couch and Oscar Charles, his second single is full of untamed energy, flying like an unguided missile of passion down “County Roads” and paints a picture of Shane’s early days in Grayson County, KY.

A native of small-town Kentucky, early touchstones like Dwight Yoakam, Steve Earle and John Fogerty joined Wheelhouse Records’ Elvie Shane’s Gospel roots to form the bedrock of his taste – along with R&B classics like The Temptations and modern superstars like Eminem. And after a fateful Baptist revival came through town, he joined a band as a front man full of wild-eyed charisma. Shane initially captured attention with a viral social media moment with “My Boy," that has since become his signature smash and debut No. 1 single. Shane's debut EP, County Roads was also released in 2021. His picture-based lyrics and knack for storytelling lead to his signing with UTA and he has since opened for Jason Aldean, Toby Keith, Brothers Osborne Brett Young, Brooks & Dunn and Lady A, to name a few. For more information, visit elvieshane.com.