DIERKS BENTLEY TOASTS TO 21st CAREER NO. ONE “BEERS ON ME” TAKING THE TOP SPOT AT COUNTRY RADIO 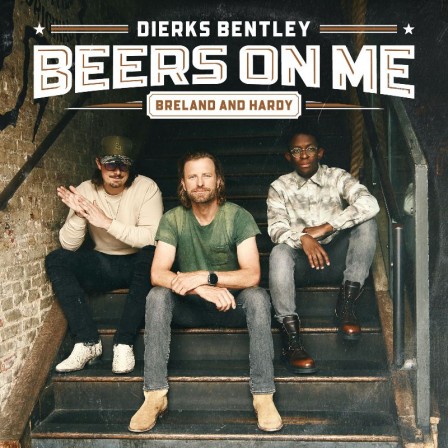 Multi-Platinum singer/songwriter Dierks Bentley takes “Beers On Me” to the top of Mediabase/Country Aircheck Singles chart and Billboard's Country Airplay chart this week, notching his 21st career No. One. Joining forces and voices with rising country hotshots BRELAND and HARDY, Bentley sings a “summertime ode to cold beers and good friends, with a few shots of reality thrown in for good measure" (People) ahead of launching his BEERS ON ME TOUR with special guests Ashley McBryde and Travis Denning, kicking off June 3rd in Wilmington, NC. It was recently announced that his SEVEN PEAKS MUSIC FESTIVAL will once again return this Labor Day Weekend, September 2-4, in a new scenic setting of San Luis Valley in Villa Grove, CO, as passes now at sevenpeaksfestival.com.

“From start to finish this song was a true collaboration, and to do it with BRELAND and HARDY really means a lot,” Bentley said. “They both bring something that’s so needed in Country music right now and can’t thank the fans and Country radio enough for embracing this one. I’m lucky to have gotten a chance to work with these two and it’s cool to be able to celebrate BRELAND’s first number one song - as an artist and songwriter - with him.”

Dierks Bentley continues to be a dominant voice for the genre with over 6.4 billion streams. Reaching a new creative high while “making music designed to challenge” (New York Times), Bentley co-wrote 10 of 13 tracks on his latest full-length release THE MOUNTAIN, which earned him the highest debut sales of his career and became his seventh chart-topping release. Last year, Bentley surprised fans with his LIVE FROM TELLURIDE collection that was touted as "a gift that Country music fans didn't know they needed" (The Tennesseean). Bentley celebrates his 16th year anniversary as a member of the Grand Ole Opry and will be inducted into the Music City Walk of Fame next month. He also has created professional endeavors outside of the music with his Flag & Anthem lifestyle collection Desert Son, along with his “Dierks Bentley’s Whiskey Row” franchise hosting four locations. For more information, visit www.Dierks.com.