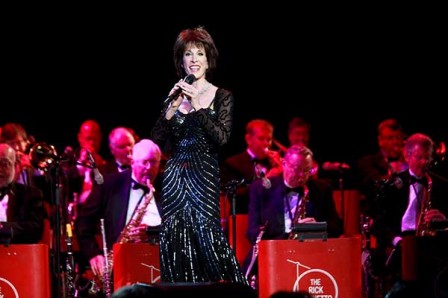 Celebrated singer Deana Martin joins Shania Twain, Olivia Newton-John, Blue Man Group, Joey Fatone, Debbie Gibson and more for a six-hour telethon to raise money for the Actors Fund of Las Vegas, assisting local entertainers who have been struggling to obtain employment due to COVID- 19. This month's show can be streamed live on Monday, April 27 from 5 to 11PM PDT.

A previous Monday’s Dark Telethon event brought in $10,000 and was donated to a local Las Vegas non-profit refuge for women.

Deana Martin is a world-class entertainer who is equally comfortable with a celebrated symphony, at a legendary concert hall or on an intimate cabaret stage with a swinging jazz quintet. She’s a New York Times best-selling author, a gifted actor, a vocalist of incredible depth and passion, a licensed pilot and the very proud daughter of iconic entertainer Dean Martin.

In addition to Monday's fundraiser, Martin is doing her part to stay connected with fans during times of social distancing by hosting weekly Facebook live shows where she takes requests, shares stories and performs new music. Each show is more entertainment packed than the last as memories are shared from a unique childhood with father and pioneer performer, Dean Martin and musical mentor, Frank Sinatra.

About Deana Martin: Deana Martin has become an instantly recognizable voice and figure in the pantheon of The Great American Songbook in her own right. Her 2006 debut CD release, Memories Are Made of This, stayed in the top ten for 40 consecutive weeks. Her follow-up CD, 2009’s Volare, debuted in the top ten of the Billboard charts, followed by 2011’s seasonal evergreen, White Christmas, 2013’s critically acclaimed Destination Moon, and her latest, 2016’s Swing Street, garnered airplay on top jazz, standards and country radio stations, emphasizing her prominent status as a hit recording artist.

As a celebrated author, Deana found herself on the New York Times’ coveted Best Seller list with her memoir, Memories Are Made of This: Dean Martin Through His Daughter’s Eyes. In it, she shares never-before-told stories about her father and his ‘Pallies’. The e-book version returned Ms. Martin to the best-selling book charts in 2015 on Wall Street Journal’s roster of best-selling e-books.