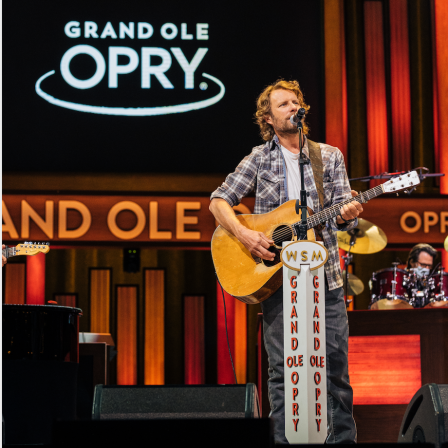 Multi-Platinum entertainer Dierks Bentley celebrated his 15th anniversary as a Grand Ole Opry member on Saturday (10/3) with a performance that kicked off the Opry's month-long 95th anniversary celebration. During the 4,944th consecutive Saturday night broadcast, Bentley performed his No. One hit “Burning Man” and Faron Young’s “Going Steady," as an ode to the Opry member that inspired him. The show concluded with four Opry members on stage together including Bentley, Vince Gill, Terri Clark and Lorrie Morgan, as they sang “Will The Circle Be Unbroken.” Additionally, the show was the Opry’s first-time welcoming back a limited in-venue audience of 500 guests since March amidst the COVID pandemic.

Bentley continues to be a dominant voice for the genre with over 6.4 billion overall digital streams. Reaching a new creative high while “making music designed to challenge” (New York Times), Bentley co-wrote 10 of 13 tracks on THE MOUNTAIN, which earned him the highest debut sales of his career and became his seventh chart-topping album. Bentley has amassed countless nominations from the ACMs, CMAs, Billboard Music Awards and more while also earning 14 GRAMMY  nominations. The multi-Platinum singer/songwriter continues to "stealthily one of Country music’s most adventurous artists" (Billboard) with the announce of his new radio show The Nashville Countdown on Apple Music. “He is dedicated to giving fans the best performance possible" (The Tennesseean) as a headliner for national festivals and during his own headlining run. Bentley has created professional endeavors outside of the music with his Flag & Anthem partnership creating the exclusive lifestyle collection, Desert Son, along with his “Dierks Bentley’s Whiskey Row” franchise hosting five locations. For more information visit www.dierks.com.