DENNIS QUAID UNLEASHES "AMERICA, I LOVE YOU, TOO" 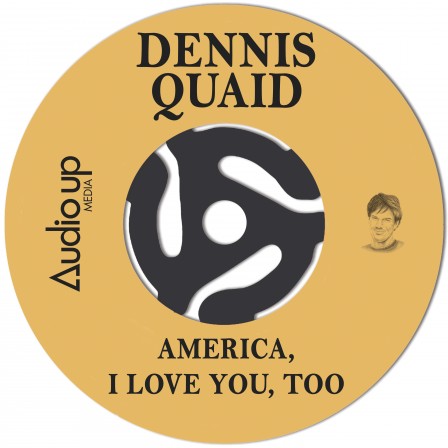 Multi-hyphenate superstar Dennis Quaid continues to connect with audiences of all facets of his legendary career, as he releases "America, I Love You, Too," a LIVE performance track originally aired during CMT's 2020 Concert for Love & Acceptance with a message of unity and patriotism.

Released via Audio Up Records, "America, I Love You, Too" captures Quaid performing with all-star musicians, including The Doors guitarist Robby Krieger.

Most recently, Quaid co-founded Audio Up, a podcast content studio, network, and production company, and launched his own podcast, The Dennissance, on the platform. He will run Audio Up alongside CEO Jared Gutstadt. In addition to The Dennissance, Quaid is involved in several other Audio Up podcasts. He co-hosts The Pet Show with Jimmy Jellinek, which premiered on July 14; Uncle Drank: The Totally Hammered Podcast alongside Gary Busey, which will debut in October with Warner Records set to release the soundtrack; and Make It Up As We Go, which he is executive producing and is due to release this fall.

Currently, Quaid is developing The Charley Pride Story, which he will produce along with Ben Howard’s production company, Third Coast Content. Quaid is also set to star in the Ronald Reagan biopic, Reagan, produced by Mark Joseph, with production currently underway.

On the television side, Quaid recently starred in and executive produced Netflix’s holiday-themed multi-camera comedy series Merry Happy Whatever. He also starred in the third season of Amazon’s Goliath opposite Billy Bob Thornton, which premiered in 2019. Previously, he was nominated for numerous awards including a Golden Globe, a SAG Award, and a Primetime Emmy for his portrayal of Bill Clinton in the HBO movie, The Special Relationship. Additional TV highlights include starring in and executive producing Crackle’s auctioneering drama The Art of More and starring in the BAFTA-nominated Amazon series Fortitude.

Along with his acting accomplishments, Quaid is a singer-songwriter and touring musician who performs both original songs and country standards. After years of playing clubs with his band, Quaid released his debut album, Out of the Box, in November 2018.

About “The Dennissance”: Dennis Quaid is a renaissance man, one of the busiest people in show business. Besides being an actor, musician, songwriter, writer and podcast pioneer; he is also a jet pilot, amateur astronomer, fly-fisherman, philosopher, low handicap golfer, medical safety advocate and armchair historian. He has powered a NASCAR around an oval track, given speeches and appeared before congress on patient safety, played golf with 2 presidents, piloted a dogsled in the arctic, meditated on the shore of the Ganges River in India, has run and cycled marathons, team-roped on a quarter horse, trained dogs and people, pitched on the mound in Texas stadium, been a middle-weight boxer, and can change a diaper in 20 seconds.

From the biggest, blockbuster movies, to being a hilarious and insightful talk-show guest and host, Dennis does it all. All of Dennis's famous friends have interests outside of the thing they're known for. In each episode of The Dennissance, Dennis talks to his guests about those things and what makes them unique in the world. This ongoing series features compelling and shareable content that focuses on honest conversations. The Dennissance combines all of Dennis Quaid's famous friends and Denizens into a weekly podcast full of can't miss content. The Dennissance is executive produced by veteran network TV executive David Hurwitz. Season one is out now, and season two has just started!

About Audio Up: Audio Up is a podcast content production studio, housing a world of infinite, audio based properties. Lead by founder and CEO Jared Gutstadt (formerly of the Jingle Punks), Audio Up is building an ecosystem of premium entertainment content within the music and audio space. From fictional scripted podcasts, which include a Marvel-like universe of musicals, where the records themselves become the story foundation, to Dennis Quaid’s unfiltered interview series, The Dennissance, Audio Up’s goal is to create a new and innovative form of IP. They are bringing audio blockbusters to life and taking this media from black and white, into technicolor. Their upcoming slate of projects include Uncle Drank: The Totally Hammered Podcast, Make It Up As We Go with Scarlett Burke and other huge country entertainment names, Halloween In Hell, Finding Pierre, Ego System, S’ad Land and Hero The Band.