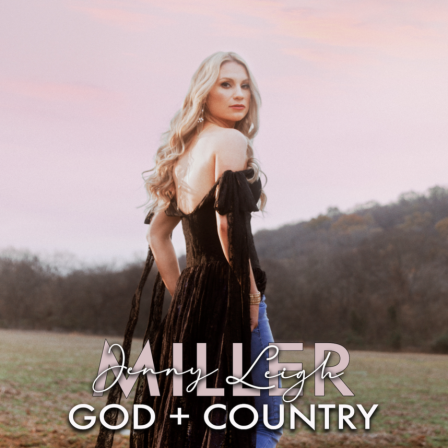 Country music recording artist and former U.S. Army Intelligence Sergeant, Jenny Leigh Miller, is set to release her new single, “God And Country”* in mid-November. Written by Miller and produced by Kolt Barber (Maverick Management), the original tune, and very first Nashville recording, will be available Friday, November 6, 2020 via all major digital retail and streaming outlets (Amazon/iTunes/Pandora/Spotify/ Tidal) in alignment with Veterans Day. Reflecting on her decision to join the military at the age of 18, the emotional track chronicles Miller’s early life chapters and her calling to serve God and her country. The warm acoustics and steady rhythm cradle the nostalgic sentiment, while rocking guitar solos build to stand for, and represent, the hope, conviction and patriotic pride of a little girl, all-grown-up. I broke my daddy’s heart When I went to war His little girl was strong But this is not what he asked for And I’m nothing compared to those who died Those who gave all, who gave their lives "I had always wanted to write a song about my experience serving and capture my unique life experience and transition from being a girly-girl cheerleader to wearing combat gear in the desert,” Jenny Miller said. “While I am very proud to have served my country, I didn't want to sugarcoat it. There are a few lines in the track that demontstrate the true reality of an 18-year-old woman going to war.” Miller joined the U.S. Army, signing up just two weeks following high school graduation. She was deployed to the Middle East and stationed in Arizona and Texas where she served as an intelligence analyst (2009-2013). While overseas, Jenny learned to play guitar and wrote songs to entertain her bunk buddies and counterparts. “Music and songwriting became therapeutic for me; it helped to ease the stress of being away from home and military life. All in all, I wanted to dedicate the song to the brave military, police, firefighters, first responders, and anyone and everyone who believes in ‘God And Country’,” added Miller. Miller paints a vivid portrait of her younger, innocent self that conveys the strength of her personal commitment to her values. Drawing upon her own experiences in the military and the sacrifices of her peers, “God And Country” celebrates the belief in something bigger than oneself. The “God And Country” pre-sale and pre-save event begins Friday, October 23, 2020; Ed Gertler, Digital Retail Services will spearhead the digital retail and streaming campaign.

ABOUT JENNY LEIGH MILLER: Jenny Miller is a triple threat, with the pipes, charisma and moves to rival any entertainer on stage. Hailing from the Constitution State, Miller is a dynamic and powerful vocalist akin to “Women of Country” trendsetters Reba, Carrie Underwood, Miranda Lambert and Faith Hill. Miller radiates power in music and in life. Just two weeks after high school graduation, Miller enlisted in the U.S. Army to achieve the rank of Sergeant--serving as an intelligence analyst. During her time in the Army, Miller was stationed in Arizona and Texas and deployed to the Middle East. Throughout her tour overseas, writing and performing country music for her friends served as a creative and healing outlet that brought comfort during her deployment. The therapeutic hobby became the launching pad to Miller’s true passion and the go-getter dove into write and record her own songs. Miller made her debut in the country scene in 2019 with the single “Driving With The Top Down.” The New Englander has since performed at Jamfest in Hawkinsville, GA, Sail Fest and Boston Green Fest. Committed to fellow veterans as a priority, she made a guest appearance at the Yellow Ribbon Fund in Knoxville, TN and at the Nashville VA Medical Center. Miller made her musical debut on WSM-AM Radio in November 2019. Juxtaposing the past and present, Miller blends old-school country values with contemporary emotional uncertainty as her signature. Combining soaring vocals, lyrical prowess with her worldly experiences, Jenny Leigh Miller is a force to be reckoned with and on of the future “Women of Country.”