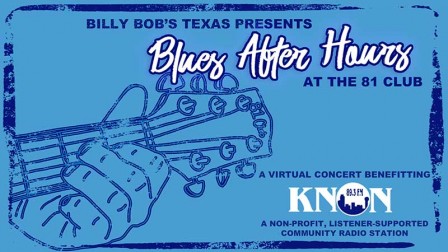 The legendary Billy Bob’s Texas, located in the heart of the Fort Worth Stockyards National Historic District, first opened in 1981. While concerts for May have been postponed due to social distancing as a result of the COVID-19 virus, the colossal Billy Bob's Texas will continue their concerts as soon as possible.

Though “The World’s Largest Honky Tonk” will remain closed for the time being, per the latest Executive Order from Texas Governor Greg Abbott, the club is still finding ways to provide entertainment for guests and fans from around the world while doing their part to help the community and give back wherever possible. As part of a local effort, Billy Bob’s Texas recently partnered with Texas FFA Foundation which raised $27,484 with a total 694 individual donors which makes this the most successful individual giving effort in recent Texas FFA history.

There will be a virtual tip jar in association with the watch party where viewers can make donations that will go directly to 89.3 FM KNON, a Non-Profit listener supported community radio station.

There are a handful of May concerts that have been postponed or rescheduled such as Gary Allan (8/1), Tracy Byrd (8/21), "Hold My Beer" with Randy Rogers and Wade Bowen (10/23). Full Venue Update

For more information on all rescheduling and future announcements, visit www.billybobstexas.com.

Now, Circle network is carrying Live At Billy Bob’s Texas! Launched in January, Circle Media celebrates the country lifestyle and puts fans inside the circle of everything country. Circle offers entertainment news, documentaries, movies, archival, new and licensed programming, Grand Ole Opry performances, and more. Based in Nashville, Circle includes a linear network as well as a companion over-the-top (OTT) premium entertainment service which is expected to launch in spring 2020. Circle is a joint venture between Opry Entertainment Group, a subsidiary of Ryman Hospitality Properties, and Gray TV.

Go to CirclePlus.com for shows, schedules and a simple guide to getting the channel.

About Billy Bob's Texas: Located in the heart of the Fort Worth Stockyards National Historic District, the 100,000 square foot cattle barn became Billy Bob's Texas in 1981. Since then more than 17 million visitors have enjoyed live entertainment and real bull riding at "The World’s Largest Honky Tonk".

The facility can hold 6,000 rowdy patrons on a given night and has been host to hundreds of musical acts, from Alan Jackson to ZZ Top. On Fridays and Saturdays, the venue also features live bull riding – a step up from the mechanical variety. It seems like an unlikely source for a series that has sold millions of albums.

To buy Billy Bob’s Texas merch, or any of the Live at Billy Bob's Texas CDs and DVDs, click here to visit the online store, or to buy tickets for special events and concerts, go to billybobstexas.com.

About KNON 89.3FM: “The Voice of The People” is a 55k watt community-supported radio station in the Dallas-Fort Worth. Founded in 1983 and programmed live 24hrs a day by over 75 volunteer DJ’s reflecting the diversity of the metroplex and surrounding communities.