GRAMMY-Nominated Duo Returns To Vegas In 2020 For The Longest-Running Country Residency, REBA, BROOKS & DUNN: TOGETHER IN VEGAS 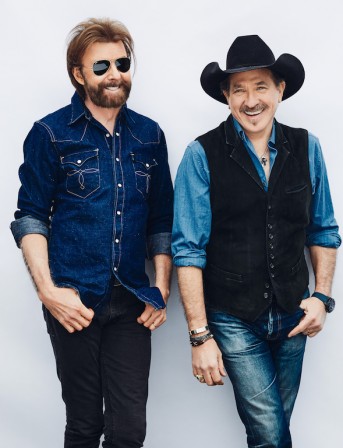 The best-selling duo of all time, Brooks & Dunn are ending a milestone 2019 with an accumulation of honors in tow after catapulting into the year showcasing their continued reverence and “timelessness” (Associated Press) with their critically acclaimed collaboration project REBOOT. The album just garnered a GRAMMY-nomination for “Best Country Duo / Group Performance” for their performance of “Brand New Man” with Luke Combs and was recently spotlighted by Rolling Stone as one of the “40 Best Country and Americana Albums of 2019.” Debuting at No. One on Billboard’s Top Country Albums chart, the release features collaborations with Kane Brown, Thomas Rhett, Brett Young, LANCO, Ashley McBryde, Brothers Osborne, Luke Combs, Midland, Cody Johnson, Jon Pardi, Tyler Booth and Kacey Musgraves. The remarkable feat marked the first time the duo has topped the album charts since 2009, while simultaneously earning their 10th Billboard 200 Top 10 album, the most of any country duo or group in the chart’s history. Critics were also quick to praise the release.

“Shows the timelessness of the duo’s catalog of more than 20 No.1 country hits, which has continued to influence a new generation of country singers” - Associated Press

“REBOOT remembers and respects the music we grew up with” - CMT

Following REBOOT's release, the duo were inducted into the Country Music Hall of Fame in the “Modern Era Artist” category in October. The duo’s thoughtfully-curated Brooks & Dunn: Kings of Neon exhibit at Country Music Hall of Fame and Museum also opened, showcasing the duo’s early solo careers, the circumstances that united them as performers and their innovative approach to stage production and touring. The exhibit will run through July 19, 2020.

In November, Brooks & Dunn took to the CMA Awards stage to share a performance of their collaboration with Brothers Osborne of “Hard Workin’ Man,” taken from REBOOT, where the “four of them blended together effortlessly” (Washington Post). The energetic rendition punctuated the duo’s first CMA nominations since 2010 for CMA “Vocal Duo of The Year” and “Musical Event of the Year” for “Brand New Man” with Luke Combs.

Next up, the GRAMMY-nominated duo will kick-off 2020 with a performance at Bobby Bones & The Raging Idiots’ 5th Annual Million Dollar Show at the Ryman Auditorium on January 13. The pair will then return to Vegas with Reba McEntire in April for the fifth year of their “Reba, Brooks & Dunn: Together in Vegas” residency, recently revealing their return to Colosseum at Caesars Palace, at which they just wrapped a winter stint this weekend. Heralded as a “a one-of-a-kind residency” that revels in their “unique onstage chemistry” (Las Vegas Magazine), the extension of the residency cements its status as the longest-running country-music show in Las Vegas.

With 20 No. One hits stretching back to 1991, two Grammy awards, dozens of ACM and CMA honors and a discography counting more album sales than any duo in history – regardless of genre – Brooks & Dunn’s influence on today’s country has never been in question. Hits like “Boot Scootin’ Boogie,” “My Maria,” “Only in America,” and “Believe” have propelled the duo to more than 30 million albums sold, with the New York Times stating “together they helped drive the power-country era of the early-to-mid 1990s and continued to benefit from the sea change in the genre they helped initiate right through their most recent albums.” Their original “Merle Haggard meets The Rolling Stones” vibe made them progressive stars in their own right. For more information visit: www.brooks-dunn.com. Follow Brooks & Dunn on Facebook: https://www.facebook.com/BrooksandDunn, Instagram: https://www.instagram.com/brooksanddunn and Twitter: https://twitter.com/brooksanddunn.