MADE BY THE WATER TOUR SAILS AGAIN THIS WEEK 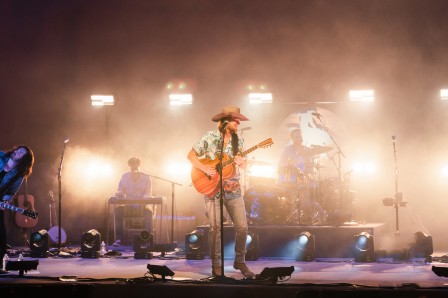 Chill-Country superstar Brian Kelley set sail on his first-ever solo run last week, as the self-proclaimed “Florida Boy Forever” launched the MADE BY THE WATER TOUR near his hometown in Daytona Beach, FL, at Daytona Beach Bandshell on Thursday (4/21), before making waves on Saturday (4/23) with a rowdy line wrapped around Saddle Bags Savannah in Savannah, GA – a town that’s inspired his song and music video “Savannah” – for his first SOLD-OUT headlining show.

The Ormond Beach Observer hailed, “Kelley’s delivery makes the most of his lyrics,” as he “returns to 'Beach Cowboy' roots” while introducing songs from his wildly-popular debut album, SUNSHINE STATE OF MIND (Warner Music Nashville / Nashville South Records), onstage for the first time “with George Strait confidence.” The Ormond Beach, FL-native promises unreleased music during the 12-date tour as well, with songwriter Jake Rose popping up at Saddle Bags Savannah to debut a never-before-heard co-write.

Mere hours before tour kickoff, Kelley also surprised fans with summertime bobber “Whatever Floats Your Boat” featuring his openers The Boat Boys. “Whatever floats your boat / Whatever cranks your tractor,” states the free-and-easy ode to doing life your way. Tacking it to the setlist nightly with The Boat Boys, “Whatever Floats Your Boat” was written by Kelley, Jessi Alexander, Corey Crowder, and Drew Parker, with Kelley and Crowder dually tagged as producers. Listen here.

With four shows up this week, Kelley is readying for back-to-back performances at The Windjammer in Isle of Palms, SC, on Wednesday (4/27) and Thursday (4/28 – SOLD OUT!), before heading to Coyote Joe's in Charlotte, NC, on Friday (4/29), and topping off the weekend at Blind Horse Saloon in Greenville, SC, on Saturday (4/30). Presented by Boat Trader and his partners at Oyster City Brewing Co., the MADE BY THE WATER TOUR docks May 19 at The Hall in Little Rock, AR. Tickets and additional details can be found at officialbriankelley.com.

Announced dates, cities, and venues of Brian Kelley’s MADE BY THE WATER TOUR:

ABOUT BRIAN KELLEY: Best known as the Florida half of the record-setting superstar duo Florida Georgia Line, Ormond Beach-native Brian Kelley is embarking on a sandy solo adventure with his MADE BY THE WATER TOUR this spring. Making a splash with debut album, SUNSHINE STATE OF MIND (Warner Music Nashville / Nashville South Records), the chill-Country champion is capturing his lifelong connection to the Florida coast. Co-writing and co-producing the project alongside Corey Crowder for an elevated version of his typical party-ready FGL energy, the set matches Kelley’s anything-goes ethos with a new sunshine-Country strut. It’s the latest piece of a creative empire which has already made Kelley and his FGL partner, Tyler Hubbard, one of the best-selling Country duos in history, and true business moguls. Alongside a chart-topping catalog that includes 2020’s LIFE ROLLS ON (BMLG Records), 19 career #1 hits, and being the only act to achieve two RIAA DIAMOND-certified singles in Country music history (“Cruise” and “Meant to Be” with Bebe Rexha), the pair maintain thriving business initiatives in addition like FGL House, meet + greet, Round Here Records, Tree Vibez Music, Old Camp Whiskey, and Wolf Moon Bourbon (with Jason Aldean), plus a reputation as electrifying, stadium-thrilling headline performers. Diversifying his enterprise, Kelley is also hands-on with projects like upcoming musical and feature film, both titled MAY WE ALL, with his production company CuzBro Productions; cult-favorite brand Tribe Kelley with wife Brittney; and a partnership with Oyster City Brewing Company.

ABOUT THE BOAT BOYS: Nashville says it all begins with a song. For this songwriting team, The Boat Boys, it literally did. After being friends for years, these three songwriters finally got in a room to write their first song together and came out with a song called, “Same Boat.” Rian Ball, multi-genre producer and songwriter, co-wrote Jimmie Allen’s “Down Home”; had 2 K-Pop releases in 2021; and has had several indie Pop and Hip-Pop releases. Zack Dyer, Country artist and songwriter, co-wrote Tim McGraw’s “If I Were A Cowboy,” and has songs recorded by Jon Pardi and more. Dyer also released a new solo song recently, “Why Don’t We,” co-produced by The Boat Boys’ Holden James. Holden is a Rock artist and multi-genre producer and songwriter; has been touring the UK; and in 2021, continues to release high energy songs with thoughtful and provocative lyrics as you will find in his song “Mistress.” For these guys’ guys, the ideal day is a sunny day in a boat on a lake or at the beach, always with their favorite people. It wasn’t but a few months later and a trip to Puerto Rico, when they found themselves with several summer songs written together and a few written with such artists as Walker Hayes, Jimmie Allen and more. Their debut single, “Long Time No Sea” released with Filmore, is their largest streaming song to date.