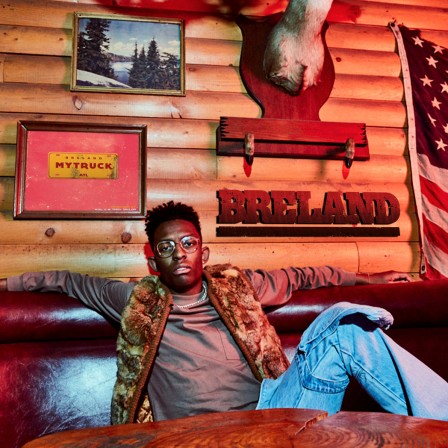 Emerging Bad Realm / Atlantic recording artist BRELAND unleashes his self-titled debut EP, BRELAND, today (5/22) and continues to go full speed ahead after the viral success of his breakout single “My Truck.” Jon Caramanica of The New York Times, testifies that, “The 24-year-old’s single ‘My Truck’ is the most viable fusion of rural and urban since ‘Old Town Road,’ and his new EP pushes the sound even further.”

"Having started my career as a songwriter, I’m so excited to be able to share my first body of work with the world as an artist," shares BRELAND. "This EP gave me the opportunity to write in a new sonic territory, and I hope it helps open people’s minds up to what the future of Country crossover music can be."

The Atlanta-based singer/songwriter and self-described “cultural bridge,” scored viral success with "My Truck" (and its Sam Hunt remix), and today’s BRELAND EP is joined by a colorful animated visual for another standout track, “Hot Sauce” – an ode to a girl who’s “pretty, but she ain’t afraid to pop off” and makes everything in life better a la hot sauce.

The sweet-heat standout is just part of the BRELAND EP, which also includes both versions of “My Truck,” the slow-grooving previous release, "Horseride," an adventurous collaboration with Country artists Chase Rice and Lauren Alaina “In the Woulds,” and “WiFi,” – a ballad of disconnected romance and password-protected hearts.

It all adds up to an undeniable artist on the rise, who’s already been praised by Stereogum as "deeply invested in the idea of country-rap for a new generation,” and named “1,000 percent the whole package” by Rolling Stone. This week, BRELAND earns a profile in The New York Times praising the “genre-fluid pop-minded talent with a lithe singing voice and an instinctual ability to mimic Young Thug-esque flow patterns,” whose debut is “full of breezy, intuitive songs that make light work of the borders between country, hip-hop, R&B and pop…” Read the in-depth piece on BRELAND’s rise HERE.

ABOUT BRELAND New Jersey-born BRELAND began writing songs as a teenager, inspired by a diverse collection of sounds and eclectic artists like the Beatles, Rascal Flatts, Prince, and his number-one influence, Stevie Wonder. While attending Georgetown University, BRELAND knocked on every possible music-industry door and eventually broke through as a songwriter, landing a number of high-profile cuts with rappers like Elhae and YK Osiris. But as he continued to work on his own music, BRELAND soon posted “My Truck” on social media as a challenge to determine whether he could elicit 500 comments – and after smashing that goal, self-released the track to multi-platform success. Along with paving the way for BRELAND’s signing to Bad Realm/Atlantic Records, “My Truck” sparked headline-worthy streaming success, including hitting #1 on Spotify’s Global Viral 50 and US Viral 50 charts. Praised by Rolling Stone as “1,000 percent the whole package,” BRELAND has been featured in leading press outlets like Genius, Paper, USA TODAY and Billboard’s “Emerging Artists Spotlight,” and in April released a remix of “My Truck” featuring Country superstar Sam Hunt. BRELAND’s self-titled EP debut arrived May 22, featuring both versions of “My Truck” and five other standout co-writes.