FANS FIRST, BARRETT SHARED A SNEAK PEEK OF THE NEVER-BEFORE-SEEN FOOTAGE TO CELEBRATE 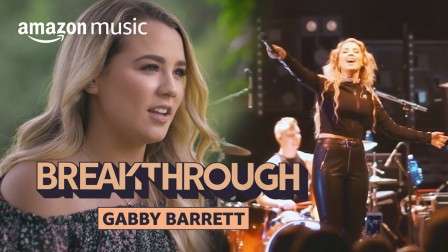 Rising star and Amazon Music Breakthrough artist Gabby Barrett released Breakthrough: Gabby Barrett, her new mini-documentary offering a never-before-seen look at her meteoric rise. Filmed during quarantine in East Texas, the Amazon Music mini-doc features candid interviews with Barrett alongside her husband, Cade Foehner, while capturing many of the milestone moments leading up to her record-breaking debut album GOLDMINE, released in June of this year.

“This is such an exciting opportunity to share with fans another side of who I am and how I got to this point in my career,” shared Barrett. “I loved getting to film it and walk through the journey again— I feel blessed and fortunate for every step along the way. Partnering with Amazon Music in this mini-doc has been amazing— they have been huge supporters of me and my music and I am very grateful for everything they’ve done.”

In Breakthrough: Gabby Barrett, fans will hear about the drive and motivation that propelled Barrett into the Country music stratosphere. Welcomed into a gospel choir at age 9, the Pittsburgh, PA-native began honing her powerful voice with the support of the church community and her dedicated family. From there, Barrett spent years on the road singing everywhere she could, until she was scouted by “American Idol.” Embracing the opportunity, Barrett met Foehner on the show. The two thoughtfully recount this special moment, and how their continued support for each other in music and life pushes them to accomplish their dreams. The clip also recalls the countdown to the release of GOLDMINE while highlighting the remarkable success of her debut single “I Hope” - the fourth song she ever wrote – plus current chart-burner “The Good Ones,” inspired by Foehner.

“I’m so proud of my darling wife and all she’s accomplished,” said Foehner. “It is such a joy to see her honored. This was a fun project to be a part of. Hoping y’all like it!”

“It’s been a joy to work with Gabby over the last year to create special moments for her fans,” stated Kelly Rich, Country Lead for Amazon Music. “From her record-breaking debut on Amazon Music to her beautiful Amazon Original song and now, a moving mini-documentary where Gabby shares her incredible story in her own words.”

Barrett gave fans a sneak peek of the project during the excitement of launch week, choosing a select handful to view the mini-documentary early. They tuned in from across the country and captured their own reactions.

Amazon Music launched Barrett’s Breakthrough campaign as she began prepping for, GOLDMINE, in early spring of 2020. Amazon Music worked with the singer/songwriter to develop a plan that included increased programming for Barrett on the streaming service, a spot on Amazon Music’s billboards across the U.S., a custom Alexa utterance for her new album (“Alexa, take me to the GOLDMINE”), a livestreamed Q&A with Barrett and Charlie Puth on Amazon’s homepage, and an exclusive listening event on Echo Studio smart speakers that featured select tracks from GOLDMINE in 3D Audio. GOLDMINE’s first-day streams exceeded any other debut Country album ever on Amazon Music globally, and the album ended the week as the most streamed debut Country album in history, with Amazon Music delivering the highest percentage of streams for the album of any streaming service in the U.S. Fans can visit Barrett’s Amazon Music store HERE to find merch and items she curated to match each song from the album.

Breakthrough is the eleventh mini-documentary created by Amazon Music since spring of 2019, diving into pivotal moments in artists’ careers. Past releases include; Mariah Carey is Christmas: The Story of “All I Want for Christmas Is You,” Still Ill: 25 Years of the Beastie Boys’ Ill Communication, The Birth of Biggie: 25 Years of Ready to Die, Velocity with Kane Brown, The Making Of: “Faith” by Galantis and Dolly Parton, Love Me Like You Should: The Brave and Bold Sylvester, and more.

ABOUT GABBY BARRETT: Warner Music Nashville’s Gabby Barrett is setting the trend. A 2X CMA nominee (New Artist of the Year and Single of the Year), Amazon Music Breakthrough artist, spotlighted in Variety’s 2020 Young Hollywood Impact Report, named Radio Disney's Next Big Thing, a Billboard "Chartbreaker," a SiriusXM + Pandora All-Genre and Country Artist to Watch, and a short-listed GRAMMY contender (Forbes, Billboard), Barrett continues to prove why she’s “Country music's rising star” (E!). Her meteoric debut, 3X PLATINUM "lightning-in-a-bottle single" (PEOPLE) “I Hope,” is 2020’s most-streamed Country song to date, cracking the Top 10 of Billboard's Hot 100 chart. Reigning atop the Billboard Hot Country Songs chart for 10 weeks, “I Hope” was also the first debut single by a solo female artist to top the Country radio charts since 2017 and made her the youngest artist with a #1 debut at Country radio in over two decades. Adding to over 550 MILLION+ career on-demand streams, her full-length LP GOLDMINE earned more first-week debut album streams than any other Country act in history and includes her current SIX songs spinning across FIVE radio formats: “I Hope” and latest single “The Good Ones” (Country radio); “I Hope” feat. Charlie Puth (Top 40, Hot AC and AC); “Footprints on the Moon” (Radio Disney); “Got Me” feat. Shane & Shane (SiriusXM’s “The Message” and Music Choice’s Contemporary Christian channels); and “Rose Needs a Jack” (SiriusXM’s “The Highway”).